Natalie is from Poole in the UK and after a successful, professional performing career of over 20 years she decided to start Glitter Productions together with her husband Jim in 2010. Natalie started her career off as a professional dancer (classical ballet), but soon realised that she preferred to combine both singing and dancing – and so after graduating with a BA Honors in Performing Arts at Middlesex University in London, she continued her career as a professional singer. She has played the leading lady on various Cruise Lines, Musical Theatre Productions including touring Mamma Mia! We Will Rock You, Smokey Joes Cafe, Grease and many more. She has worked with the likes of Peter Kaye, Pete Waterman and performed alongside many West End artists.

Natalie is extremely proud of Glitter Productions and is 100% dedicated to producing fantastic Show Bands both Sweden. She is also a very happy and busy Mum to her 5 kids Presley (9), Mimi Belle (8), Sonny Rox (6), Jojo Red (4) and baby River Quincy!

Jim Bob was born in Gothenburg, Sweden and started to learn to play the guitar from a very young age. Growing up in a Rock ‘n’ Roll family with a father that released 6 albums in the 70’s and 80’s (yes, he was in the Swedish charts alongside ABBA themselves!) with Motvind, it was only a matter of time before Jim would become a professional performer himself. Throughout his early 20’s, Jim toured musicals such Hairspray, Mamma Mia! and Grease and also perfomed onboard various Cruise Liners. He now enjoys teaching his 9 year old son, Presley, how to play the guitar as well being the founder and arranger of Sävefestivalen.

A showman to say the least, Jim Bob always gets the party started!

Märtha trained at Dans Forum in Gothenburg, Sweden and is an absolute joy to have on the team. Professional to say the least, she is a pure all-rounder in singing, acting and dancing. She has performed on various stages around Europe including Garbos’ Dinner Show in Gran Canaria and Cabaret Lorensburg in Gothenburg. Her Musical Theatre credits include ‘The Addams Famiily’ in Gothenburg and Malmo as well as “Charmoren fran Kangedrag” at Gunnebo slott.

Märtha is a stunning performer with a voice that is so amazing it is difficult to distinguish the difference between her own and Anni-Frid from ABBA.

Gothenburg born Anders has been an all-round musician since the age of 13 with drums being his main passion back then. After almost making it as a professional football player, Anders toured Sweden for some time as a drummer with various bands and artists. However, one day a Fender Precision bass caught his eye who he called “Britta”, after a while Anders and “Britta” fell out. A few more bass guitars later he has found true love with a Music Man Stingray and she is called “Gunnel”.

Anders loyalty and dedication to his craft makes him the backbone and an invaluable member of the Glitter Productions crew.

Johan was 8 when he started playing drums after his dad bought him a small rock kit. But for some reason drums were not right for him at that time so he started playing the guitar instead. Then at 17 he started playing the drums more seriously again and loved it! So nowadays, multi talented Johan plays both guitar and drums and runs Rabbit Hole Studios in Brewhouse, Gothenburg. He has been on various tours including in Senegal with Vocalensemble Amanda where he not only performed, but also participated in and hosted various workshops for the residents.

An unbelievably talented drummer, technical, passionate and will never miss a beat!

Gothenburg based Daniel is a professional multi-instrumentalist who grew up in the very North of Sweden in a small village called Pajala. At a very young age he started playing the guitar and as his passion for music grew he also learnt to play the accordian, bass and saxophone. After graduating from Piteå Musikhögskola, he has toured the World as a full time musician and is booked nearly every day of the week as a session musician, music teacher or Glitter Productions band member!

Daniel is also the founder of Svensk Artist Faktura, the most popular choice for musical artists to get paid! Glitter Productions is so happy to have Daniel as a regular band member, he is incredibly technical and literally only needs to hear the most complex guitar solo once to be able to play it back perfectly!

Trained at Arts Educational in London, Chloe has performed with Glitter Productions since 2013. Chloe’s vocal tone is to die for and can carry off playing either Agnetha or Frida with ease. She has worked in the entertainment industry for over 20 years, appearing in theatre and television productions across the World including Casualty, Jonathan Creek and A Touch Of Frost.
Early on in her career she became a backing vocalist with singer/songwriter Elio Pace with whom she sang at many prestigious events helping to back such artists as Ronan Keating, Huey Lewis, The Feeling and Ticco Tores (Bon Jovi.) With Elio Pace she appeared on Terry Wogan’s BBC Radio 2 show Weekend Wogan with her own track Didn’t I Try. She has sung with a multitude of artists such as Beverley Knight, Billy Ocean, Bill Murray, Glen Campbell, Westlife and Chris De Burgh to name but a few!

Chloe is as lovely as she looks and a complete industry professional.

Lorraine trained at The Royal Ballet School but has spent most her career in Musical Theatre in West End productions such as Phantom of the Opera, Evita, South Pacific and Cats to name but a few. She has been singing Abba’s music for most of her career and recently finished performing in Mamma Mia! in the West End where she regularly played the leading roles of Donna and Tanya.

Lorraine runs Mini Molesey, a Theatre School for children and sings with Glitter Productions for the adults!

Alice is from London and has been performing professionally for the past 20 years. She trained at LSMT and has starred in touring productions such as Mamma Mia! and We Will Rock You around Spain. She has sung at prestigious venues such as Her Majesty’s Theatre in London as well as performing as Lead Vocalist on various Cruise Lines around the World.

With her Irish background, Alice has an incredible vocal tone that will make you melt! She is also a fanastic dancer and actress and a total babe.

Simon is an Abba Vision veteren and has been playing in the band since 2000! Simon trained in Acting at Arts Educational and Alra and since then has appeared on stages all over Europe. Due to his charming good looks and brilliant acting skills, Simon was one of the most saught after Austin Powers Tributes in it’s hey day. 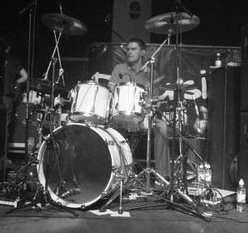 Chris has been playing drums since the age of 3! Born into a legendary musical family, it was non-negotiable that Chris would fall into the music industry after growing up sitting in on recording sessions and gigs with the likes of Roger Daltry, Ronnie Wood, Pete Townsend and Kenny Jones (with whom he recieved his very first drum lesson from!). He is talented beyond belief and dedicated to his profession and skill to the point when he will warm-up his drums even before a brief Abba set.

Down to earth, loyal and exceptional.

*The Glitter Productions family has many more talented singers and musicians that regularly perform with us.